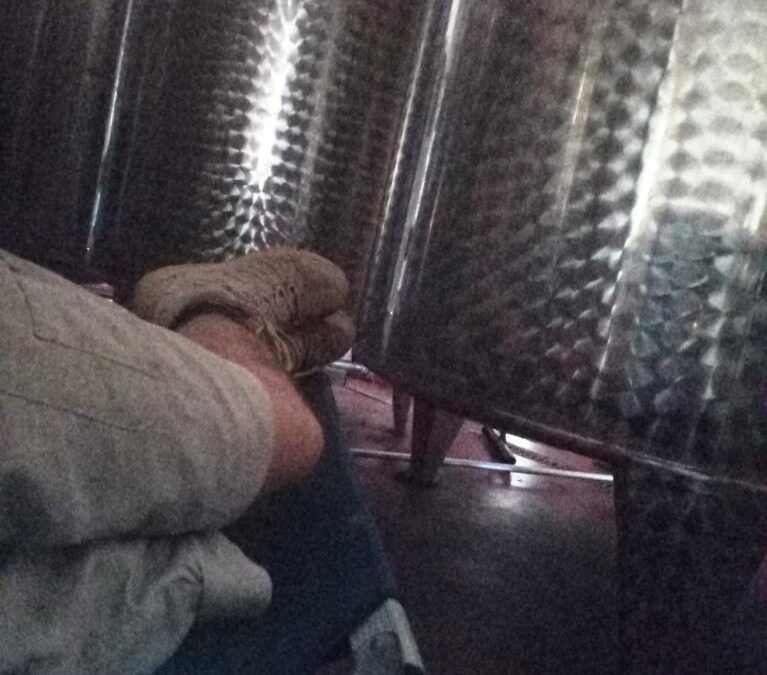 A rather peculiar season for harvesting it’s been this year.  The extended heat wave for almost two months and a half, during summer, had us worry a lot whether the grapes would be able to come out intact from heat’s torture while at the same time we had to deal with extreme drought as well.

As luck would have it, the last day of harvest wouldn’t go without any issues either, all things were coming to an end in a peaceful manner when a maelstrom struck with the truck being 1/3 laden.  The wind rose from zero to around seven to eight beaufort wind scale and begun shaking the truck violently, there was fear it would capsize due to its bed load canopy’s height but it got torn away saving us further drama from having to collect grapes from the ground.  Having turned the truck 180 degrees we managed to stabilize the flailing canopy but not without significant effort!

Despite the ordeals our grapes were healthy and with very minimal interventions having done only two sprayings with sulfur and copper throughout the entire season!

Lack of sleep due to a sudden surge of mosquitoes, when at home, made things even worst when night after night I had to confront attack waves from these tiny irritating intruders.

Currently everything seems to have come back to normal rhythms and the vinification process is going at a steady pace while at the same time we’re cleaning up and maintaining equipment used.

We’re curious to see what type of winter we’ll be having since we’re preferring to employ natural stabilization, keeping things as natural as possible.

You can find out more about which cookies we are using or switch them off in settings.

This website uses cookies so that we can provide you with the best user experience possible. Cookie information is stored in your browser and performs functions such as recognising you when you return to our website and helping our team to understand which sections of the website you find most interesting and useful.

Strictly Necessary Cookie should be enabled at all times so that we can save your preferences for cookie settings.

If you disable this cookie, we will not be able to save your preferences. This means that every time you visit this website you will need to enable or disable cookies again.